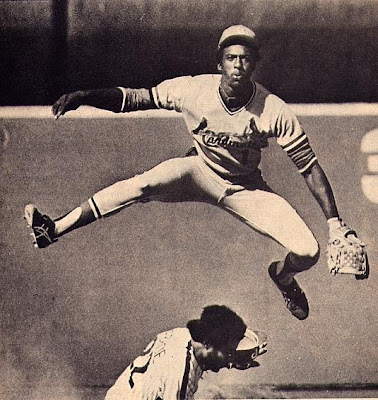 Jumpsteady was Garry Templeton's nickname in his early Cardinal days. It didn't really stick around though and was pretty much forgotten when Garry played in San Diego, not too sure why, did Tempy drop it, or people just didn't identify him with it, or maybe it was left back as part on his controversial St.Louis chaotic episode? Maybe I'll get to ask the man someday.

I thought it was a pretty cool nickname though, sporty kinda funky. I use to think it was only about his athletic prowess on the field but it actually had a groovier origin. When asked about it Garry answered that it was given him by his cousin after he saw him dancing to Aretha Franklin's song Rock Steady. Noticing Tempy was doing more jumping than rocking he then nicknamed him Jump Steady!
It's been written in either one or separate words but from a 1978 game used bat I have it's signed Jumpsteady in one word.
Obviously my own nickname is derived from it, being a huge fan of funk music I just chose the Funksteady handle.
Posted by funksteady at 4:37 PM