Coming back on the hat-waving-effect at the start of game 3 of the '84 NLCS.

I've already posted the video of how Garry had cheered the crowd up as the series moved to San Diego with his team down 0-2. Just when his team needed it the most Tempy uncharacteristically expressed himself emotionally, coming to the field slapping hands and high-fiving his teamates like never before and then proceeded to cheer a rather timid home crowd by vigorously waving his hat firing up the fans. 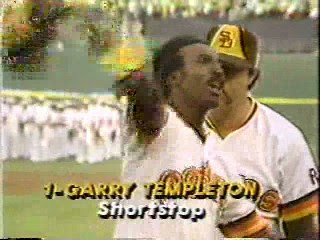 Here's how the whole thing was perceived from the other team's perspective.
From Larry Bowa's book, 'I Still Hate To Lose'.

The next night, October 4, 1984, the stadium was bunkers. During pregame introductions, shortstop Garry Templeton stepped out of character and waved a towel over his head to further incite a mob that didn’t need inciting. The comeback was on. « I think Garry Templeton had more of an effect on the fans than they did on him, » said Frey. « He did something that was so unnatural for Garry Templeton to do at that particular time. It kind of aroused the fans, I thought. The waving of the towel when the players were introduced. Otherwise, I have no idea what got anything started. I don’t know anything more about it. I don’t give a darn about psychology or anything like that. And I don’t think any of this means a darn thing to me. It’s not an important issue to me. »
Perhaps not now. In game 3 Templeton did more than towel wave. He snared a Leon Durham line drive to blunt a first-inning Cubs rally. And his fifth-inning double knocked in two runs and gave the Padres their first lead of the series.

Apparently Jim Frey didn't care about the psychology behind the gesture nor did he seem to understand what really happened, how, why or what changed the momentum of the series but it's obvious that Garry Templeton knew what he was doing and he would go about raising his crowd, teamates and game to the next level.

They went on to sweep the next 3 games to win the National League championship and play the Tigers in the World Series!
Posted by funksteady at 8:46 AM No comments: