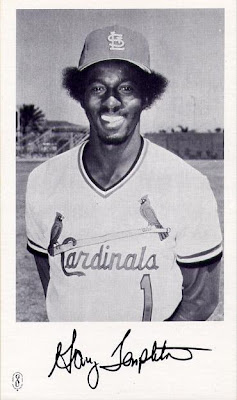 People often ask me why I’m such a big fan of Garry Templeton, and the answers to that question are a plenty. Tempy was a triples hitter, the rarest and most exiting hit in baseball, he was fast, very fast, was a stolen base threat, he could hit over .300, get 200 hits, also, he was a shortstop, in my opinion the most athletically demanding position in baseball, and not only was he a shortstop but, in his prime, he was the most acrobatic and spectacular shortstop, not only of his era, but that I’ve ever seen play to this day. Yea, including Ozzie… And there is plenty of evidence to back this up, range statistics, peers’ testimony, and a bunch of highlight plays to be seen in recordings of games from late 70’s to early 80’s.
But probably the ‘deepest’ reason of all was that, he was cool…
Now the next question I usually have to answer is, ‘whad’ya mean he’s cool?’
Ok, here’s what I mean.
First of all what is cool? Cool is something else, it’s special, it’s got personality and most of all it’s natural. You can’t buy coolness, can't steal it either, you can’t try to be cool, that would be the ultimate uncoolness, you can only BE cool. Either you have it or you don’t. Sure some grow into coolness, they start out being a bit geeky or nerdy but eventually when they let their true personality come out and express themselves the way they are deep inside, then they become naturally cool.
Actually all of us have the seed of coolness somewhere inside, it’s our true self, but many will never know it’s there and sadly, will never be able to let it grow.
Also, only the cool can recognize the cool, just like only a genius can recognize true genius. Others might know what cool means, what genius is, and be naturally awed by it, but to truly appreciate it you gotta be it yourself…
I grew up in a cool family, in a cool neighborhood with cool friends so it all came naturally to me. I don’t care for bragging, it’s simply the truth, and I tell it like it is only for the purpose of explaining how it is that I can appreciate the pure expression of coolness where a lot of people can only see the illusion of appearances as depicted by the blind souls influencing today’s uninspired society…
Now let me illustrate, with all sorts of evidences, just how cool Garry Templeton really was in an era that was just starting to reluctantly tolerate expressions of coolness.
Here are the first couple of things that struck me about Tempy, his looks and the hype, what everybody was saying about him;
- The looks, the first I actually saw of Garry was his 1978 Topps card shown here; 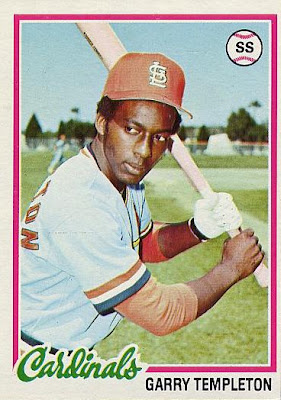 followed by a few other pics of that same year; 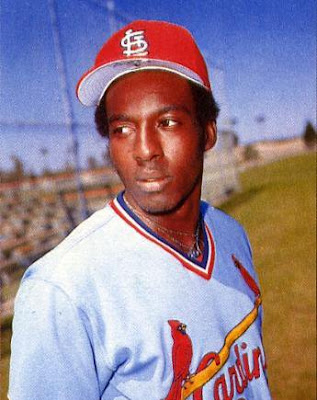 Now THAT is a cool looking ballplayer! Not only was Templeton a handsome young man but notice the relaxed, confident composure about him, very atypical for a 21 year old professional athlete trying to prove he was worthy of all the hype.
And this wasn't cockiness, arrogance or some sense of false pride as is often the case with young promising prospects, but genuine faith in his own potential. A confidence he had earned, whether it was on a baseball diamond, a basketball court, a football field or even at a track meet, young Templeton had always risen way above the pack to shine forth the light of his God given athletic abilities.
He had learned to play the game as a boy amongst men to raise the level of expectations to dizzying heights.
-Now about all that hype.
To that day, I don’t remember a young baseball player coming up with more hype than Garry Templeton. Back when he was playing in the Cardinal's farm system, in Tulsa, the ageless wonder himself, Satchel Paige, touted young Garry as the best shortstop he had ever seen! There were so many praises that some of the press people started being a little suspicious, even sarcastic about it. Like that Post-Dispatch writer who suggested that with all the hype Templeton ought to skip his career and report to Cooperstown for immediate induction into the Hall of Fame...
So how did the young phenom answer both doubters and believers? When asked if he could handle the pressure of being a major league starting shortstop at the ripe ol’ age of 20 he had answered ;
"I think I can handle almost anything"
Cool…
Here are some of those quotes from his early days, illustrating how impressed his managers, coaches and teammates were about his game and attitude;
- Lou Brock is standing in left field during a 1977 exhibition game as a ground ball heads his way. In front of him, the Cardinals' kid shortstop, Garry Templeton, glides into the hole at full speed. Never breaking stride, Templeton picks the ball out of the province of outfielders and slings it to first base. The runner is out. "I said then he couldn't make that play again on instant replay." Brock recalls. "It's almost physically impossible. But now I've seen it so much it looks routine."
Lou Brock Article from Baseball Digest June 1978.
-"When you look at him, he's still a baby in a man's job... but he's doing the job". Jack Krol, 1978
- "It was on a Monday night in Cincinnati. GeorgeFoster hit a one-hop rocket between shortstop and second base. In my mind, there was no way anybody could make that play. But Garry took one longstep, got his glove right on the ground and came up with it. He never left his feet, just straightened up and gunned him out ".
Ted Simmons, the sporting news, april 22, 1978.
- "It's nice to know he's out there, it's that plain and simple. He gets balls in the hole that a lot of guy's wouldn't even touch. Sometimes when a ball is hit, you say, 'O no!' Then Temp's there and you say, 'Oh YEAH!'."
From Bud Schultz, pitcher and teamate with the Cards.
- " Templeton is clearly a natural, which is a good thing because he has rarely lingered anywhere long enough to absorb much instruction."
From Jim Kaplan, writer for Sports Illustrated october 1977.
- " He has turned the triple, baseball's rarest hit, into a routine race around the bases. You know they're triples when he hits them . The opponents know it too. They just get the ball and throw it in the direction of home plate or a relay man to head him off."
Vern Rapp, Cardinals coach, Baseball Digest June 1978.
These are just a few examples of all the things said about Tempy when he started playing pro ball. Now you just don't get these kinds of comments from these kind of people unless you're really something special because these men have been around and seen it all before, but Templeton found ways to impress pretty much everybody who'd seen him play back then.
Most definitely qualifies as cool!
Ok, end of part one. Much more to come in the next article, Mr. Cool part II
Posted by funksteady at 10:02 AM 2 comments:

From 1977 to 1979 Templeton became the first National League player to lead the league in triples three consecutive seasons with, 18, 13 and 19 three bagers. He could have done it four in a row in 1980 had he not missed over a months play to an injury. Here's a couple of videos of Garry hitting not one but two triples in the same game on april 30th 1980!
Watch Jumpsteady dashing 'round the bases, helmet poppin' loose 'fro flyin' in the wind!

Posted by funksteady at 12:44 PM No comments: