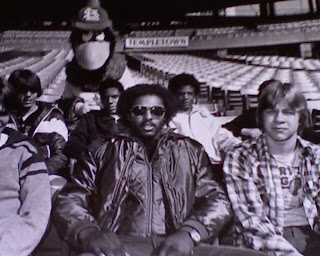 Speaking of cool, I just came across this pic that his son Garry II posted on his Facebook page, Garry sitting in Templetown, the section of seats he had purchased for underprivileged kids in St Louis' Busch Stadium in 1980.
Jumpsteady looking as cool as ever with his shades, funky 'fro and flashy jacket, looking like he's about to jam with Parliament Funkadelic lol!
Well there you have it, the man was gifted but had a heart to give back to the less fortunate. Many people in St-Louis remember him positively, both for his great skills and generosity.
Posted by funksteady at 7:31 AM