Well, here's the pride and joy of my Garry Templeton memorabilias collection, just a few items really;
I have three game used bats, including one that says Jumpsteady Templeton instead of the usual Garry Templeton.
A pair of his 1984 Padres, signed, game worn cleats, of course the championship season. And I can say that he wore size 10 1/2, which is my size, 'cause I tried them on and they fit like a glove, however it seems that Garry had a problem with his right foot 'cause there was some added padding under the arch of that foot which made them uncomfortable for me when I had them on. (Btw, I only wore 'em for a few seconds since I wouldn't have chanced removing Garry's mystical fleet footed aura away from 'em...)
Also have a signed Rawlings baseball saying 3 time All-Star.
And of course a bunch of baseball cards, magazines where he appears on the cover or inside, his 1978 Sports Illustrated poster and about a dozen recorded DVD games of his with the Cardinals and Padres.
Not quite enough to open the Garry Templeton museum yet but hey, if you know anybody who's got more, have him contact me and maybe we'll get ourselves a booth somewhere down the street from the HOF Museum or something...
But back to the jewel of the crown, my pride and joy, this 1980 powder-blue-away St. Louis Cardinals jersey, game worned and signed!
It's my all time favorite jersey and here's why.
I've always liked the Cardinals jersey, logo and colors. And when you have all these sewn-on a powder-blue jersey it makes for a very flashy piece of garment!
But what was even cooler was the 1979-80 jersey because they had numbers on the sleeves instead of on the front of the jersey.
And in the case of Garry because of the length of his last name and the simplicity of his single stroke number it turned into a perfectly symmetrical piece of art!
Watch the pics and notice how the nine letters of his name harmoniously arch around the straight standing, single digit, that is the daddy of all numbers... 1.
Then when you see that same digit on each shoulder it just makes for a perfectly balanced jersey.
I guess it's all in the eye of the beholder but well, those who have eyes will see... 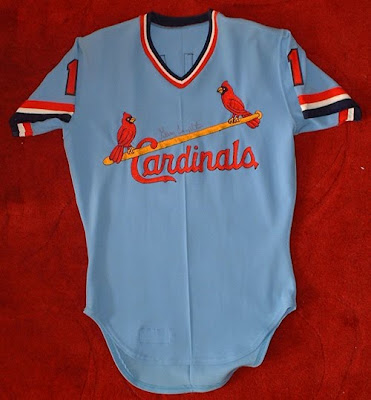 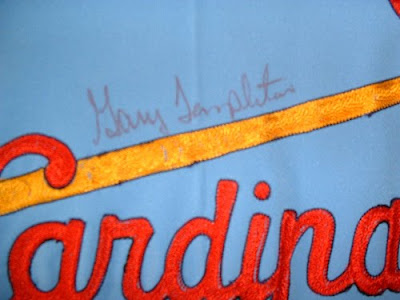 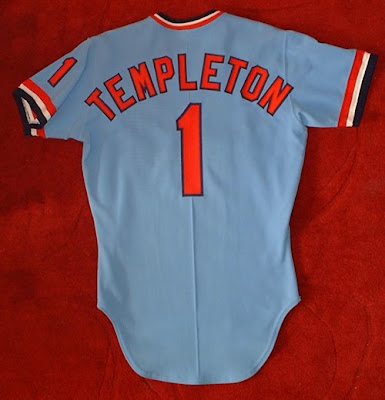 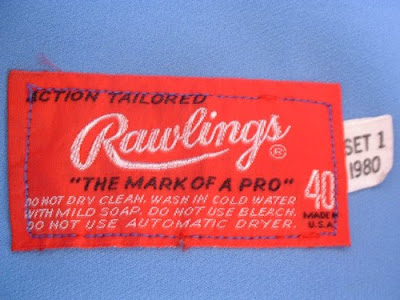 Posted by funksteady at 8:55 AM